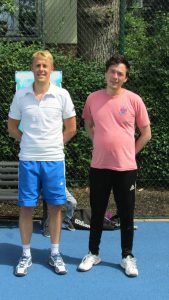 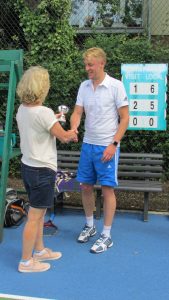 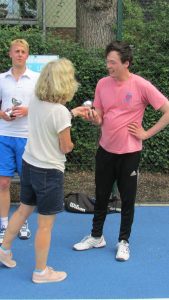 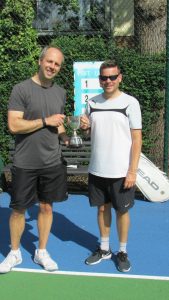 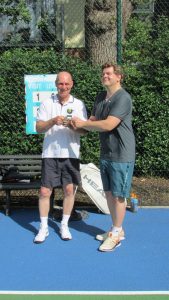 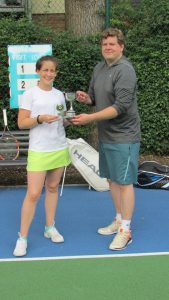 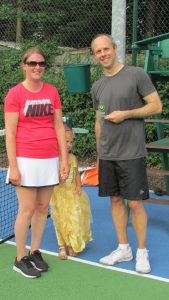 Uncategorized
Starting at at 2pm we have a fun tournament lined up, open to all members. Usual Turbo Format where we will get as many rounds of play a possible with partners  picked a random.
This will be followed at 4pm by a bring your own BBQ, Bring something to put on the BBQ ( burgers sausages, veggie stuff etc)  and the club will supply the charcoal, ketchup etc. Don’t bring drink as the bar will be open!
It’s a turn up and play, eat and drink event, so please come along if you can. Should be a great afternoon.
See you soon,
The Committee
Uncategorized

Finals Day 20th July 2019  – As if on cue the rain stopped and the sun came out for another terrific Finals Day at the Club.

Men’s Singles. Jon Warnes and Andy Jackson took the court, having never played each other in a Men’s Final before.

As play got underway, Warnes was serving well, and giving Jackson a run for his money. There was some terrific cross court play, and superb returns, that caused gasps and comment from the crowd. Nevertheless the incumbent holder (Warnes) marched on and took the first set 6-1.The second set was a different matter, Jackson came out with new resolve and the set went with serve. Warnes looked as though he could be in a bit of trouble. Could it be going to three sets??! In a very exciting second set, that was enjoyed by the spectators, Warnes stepped up to the mark. After a further, very hard fought battle by both players, he eventually took the set 6-4 and the match 6-1, 6-4.The players were a credit to the Club. Great tennis, played in excellent spirit offering tremendous entertainment. Congratulations Jon.  Andy after a performance like that we expect to see you again next year.

Men’s Doubles – Familiar faces took to the court in Oliver Bunyan, Paul Lamb, Jon Yelland and Kit Davies .The match was eventually won by Kit Davies and Jon Yelland against a resilient Oliver Bunyan and Paul Lamb. Davies and Yelland put on a solid show, taking the first set 6-3 before coming back from 4-1 down to take the second 6-4. Their strong return of serve along with the windy conditions made it difficult for Bunyan and Lamb to get into the match. A good performance by all much to the delight of an enthusiastic ELTC crowd. Well done to all

Again familiar faces in the Lindsay Cameron and Oliver Bunyan pairing, and new blood as Jon Yelland and Michelle Agate took to the court. We saw the full range of shots in this final. Superb serving from Bunyan, some great net shots, lofty overheads and canny drop shots from all participants. Eventually the experienced pairing of Cameron and Bunyan proved to be difficult to beat and they took the final 6-3, 6-2. The Yelland /Agate pairing showed tremendous promise for the future with sound directional comment from Yelland.

Thanks go to Lianne, Nicky and Jon for umpiring the matches and to all the spectators for supporting the players.

Now we have to look forward to the next part of Finals Day when the Ladies singles and Doubles will be played. Date to be announced soon.

This years Finals day will be held on the 20th July. This is an opportunity for everyone associated with the club to come to the club enjoy some great company, have some food and drink and watch some great tennis.

The Matches will start at 1pm and the order of play is as follows: (timings are approximate)

There will be some refreshments provided at a reasonable cost and the Bar as always will be open.

This is one of the highlights of the year and we look forward to seeing you all there.

On Saturday June 22nd we have 2 events going on at the club. Starting at 2pm we have a tournament that we hold every year in the name of a former club member. This is usually great fun with members mixing in and often playing with members that they haven’t played with before. Nothing is taken too seriously!!!

After the tournament there will be a Mid-summer BBQ and this will start at approximately 5pm. This will be the second year running that we’ve held this event and last year everybody found it most enjoyable. The bar will be open for this.

Members are encouraged to join in with both events or just one, if that suits you better.

There are sign up sheets in the clubhouse or just turn up at 2pm for the tournament. Tickets for the BBQ are £10 for adults and £5 for Under 18s. Please either sign up for this or purchase tickets from Committee members. Alternatively, let Sue Young know you are coming by emailing her at smyoung35@hotmail.com.

We will be having our annual Open Day on the 18th of May between 2pm and 5pm – This is part of the LTA Big Tennis Weekend sponsored by Nature Valley.

Please tell all your friends, family and anyone who will listen to come along for some fun and some free tennis

All members are welcome to come along and show the club at its bustling best.

Look forward to seeing you all there for a great event

With six victories and one draw, our Men’s 1st team had a successful winter season. They finished as champions and gained promotion to Division 3 for next season.

With a core of 5 men covering all the matches, consistency in selection helped generate strong performances with the highlight being a 16-0 whitewash of local rivals Winchmore Hill.

It’s given the team something to build on – a good confidence boost – as we start our summer season at home on April 30th.

Why not come along and see us in action?

Looking forward to another great social event at the tennis club.

Still a couple of tables available – £10 including fish and chips.

All welcome – Sign up sheet and information available in the clubhouse

Look forward to seeing you all as the Summer Social tennis – starts from 7.30 each Wednesday during the summer.Balls and lights included

Uncategorized
Reminder that on Saturday 6/4/19 we have a busy day planned at the Club, so please come down to all or at least part of it if you can;
Next Event for you diary after this is:
27/4/19, we will be holding a Quiz Night. 7:00pm start and still only £10 each to enter, which includes a fish and chip supper. This is open to members and non members. Sign up sheet in the club house or let Sue know.
Posters containing further information on these events are up in the clubhouse.