Our annual Derek Sledge tournament named after a Life Member of ELTC who sadly passed away a few years ago was played last Saturday in the blazing sunshine.

Each round consisted of 9 games with a sudden death deuce point. Some of our number played with traditional wooden racquets which seemed to be of particular benefit to Michael Amey!

Our overall winner was Colin Woodley with a stunning 29 points – 4 points clear of his nearest competitor. Frank Coppi came second with Jim and Michael Amey in joint third. Colin received the magnificent Derek Sledge cup and a Brazil pint glass! 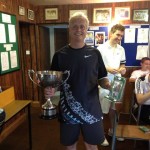 Our lowest point scorer received a high quality 100% rubber, England Duck but sadly this now depressed duck has been abandoned at the club. If his owner would kindly retrieve him this delightful duck would be happy once more…

A special award was given to Messrs Keown and Arrowsmith for their comedy act (not sure it was always intentional!) and general good attitude on court. They received a stunning Samba whistle/bottle opener which no self respecting World cup lover should be without. 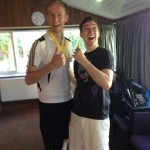 The beer element was introduced between rounds as a tasting game. We all tried 5 International beers and rated them for: Aroma, Flavour, After taste and Overall experience. Overall our Polish beer – Tyskie – Just about came out as the winner, closely followed by our American Tap Room Brewing Beer. A beer which polarised opinions was the Brazilian Bachata (beer with rum!) this proved to be most popular with all the ladies. Michael Amey also rated this highly however I think these results may have been skewed by his beer consumption as Michael’s scores steadily rose in line with the amount of beer he was drinking…

All in all an enjoyable and successful tournament. Special thanks to Imogen, Jim and Karen for organising score cards and beers.

Call to enquire about our Introductory £99 New Member Special Offer