The home of the Hot Rackets team. 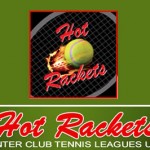 We have one Men’s team in the Herts Hot Rackets league.

We are currently in Division 1B.

All matches are the best of three sets. If a third set is necessary it is played as a Champions 10 Point Tie Break to decide the rubber. Sets one and two are normal 6 game sets ( by two clear games) with a 7 point tie break if necessary to decide the set.

Teams comprise of four players, making two pairs consisting of a Number 1 and Number 2 Pair. Matches consist of 2 Rounds and 4 Rubbers being played.